Kosovo Team Vies for World Cup of Plowing in Alberta 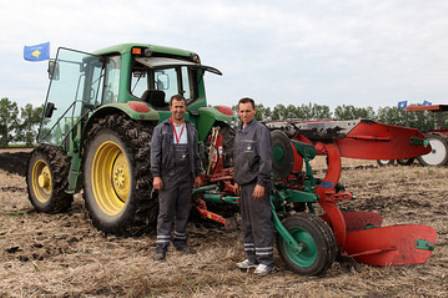 From the Olympics to soccer's World Cup, major team sporting events refuse to recognize Kosovo as a nation. One does, though: the World Plowing Championship. That has catapulted men like Afim Sharko and their plows to the status of sporting heroes in their Balkan homeland of Kosovo, the former province of Serbia which declared independence in 2008 but has yet to gain United Nation's recognition as a state.

This weekend, Mr. Sharko and his team of two farmers will be in the fields of Alberta, Canada, hoping to bring home the Golden Plow - the plowing world's equivalent of the World Cup - and burnish the national credentials of a state starved of major sporting events. "Why shouldn't we plow as Kosovars?" Mr. Sharko said. "This competition is very important for Kosovo," he said.
Last year's Kosovar entry into the World Plowing Championship was its first in any international competition, according to Mr. Sharko. They finished last on a leader board of 30, a loss Mr. Sharko, team coach, put down to lack of experience.Despite the low placing, the team was feted back home, with a round of television appearances, newspaper interviews and a government-held reception for the returning heroes.This week, Mr. Sharko arrived in the central Alberta town of Olds, and immediately dropped to his knees to touch soil he had long revered.
"For a plowman, this is a dream," said Mr. Sharko, currently studying for a PhD in soil science. Almost two thirds of the soil in Kosovo is composed of clay, but in Alberta's black soil, it's only 20%, he said.
For the past three days Mr. Sharko's two competitors, farmers Esad Shehu and Lulzim Shehu, have been practicing for the two-day event in which tractors are used to plow furrows in different types of field. They are judged on criteria such as speed and how straight and deep their furrows are. It's a competition typically dominated by Irish and British teams, whose fans arrive in big groups with faces painted in their national colors.Host nation Canada was among the first to recognize Kosovo, whose wider recognition is being stymied by Serbia. (The U.S. also recognizes Kosovo and led the air bombardment that helped clear Serbian troops from their former province in 1999.) "We welcome all Kosovars to plow in Canada as Kosovars," said a spokesman for Canada's Department of Foreign Affairs, Trade and Development.